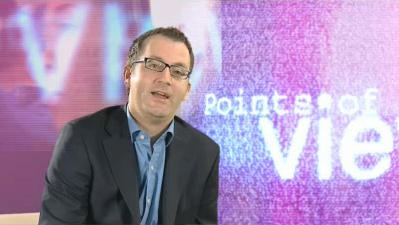 Here are some examples of After Effects work I did at The Bank, including keying, particle generation, rotoscoping and light effects

The first piece was shot against green screen – I keyed out the people using KeyLight, then matched the ‘virtual studio’ background to each shot.

The second video – the brief was to create the look of a dodgy satellite link, create falling snow and key in suitable background for someone apparently ‘calling in’ on a skiing holiday. Snow was created with a particle fountain, and digital ‘blocking’ effect by animating the mosaic filter and time remapping (the questions were going to be overdubbed later, hence the quiet off-camera sound)

For a middle eastern venue these static shots needed bringing to life, which I did with various lighting effects and masking – note even the candles sparkle!

This was rotoscoping for a Nike event, for a video ‘cube’ – the running man was already shot, I found a suitable ‘loop’ and drew over the footage. In the end they went for a more ‘abstract’ less realistic Flash animation which I then integrated with the video specs to wrap around the ‘cube’.